A friend held her and the water above her head. Then they lifted her out of the pool and carried her on his back out into the day outside. “And it kind of carried… 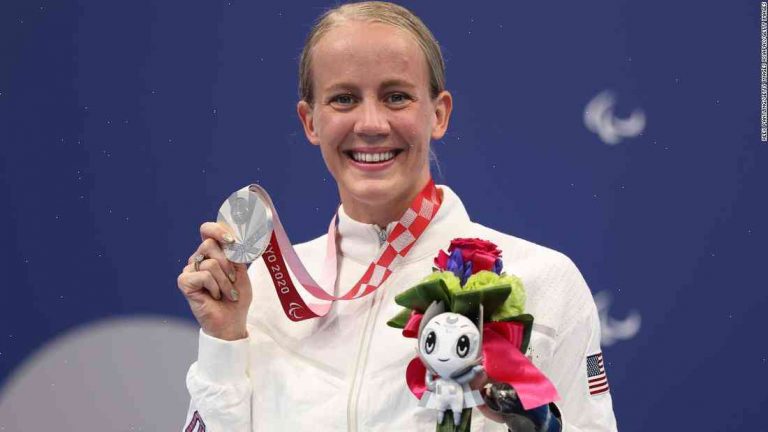 A friend held her and the water above her head. Then they lifted her out of the pool and carried her on his back out into the day outside.

“And it kind of carried me for probably a couple hundred meters,” Mallory Weggemann said. “Then I was just back on land.”

Almost a month after suffering a serious back injury from a fall, Weggemann, 25, returned to the pool Saturday and competed in the U.S. Swimming Championships at the Franklin-McKinley Aquatic Center in Baltimore.

“It’s just amazing to be back,” Weggemann said. “Everyone’s excited to see me and so warm to me. It’s just nice to be in Baltimore and be home.”

Weggemann has been living in Missouri with her husband, John-David Weggemann, who serves in the Army Reserves. They plan to move closer to his family in June. She isn’t sure when she’ll be able to swim competitively again. She said “it may be over a year” before she’s able to compete again. But that was to be expected.

“I feel like I’ve almost earned it right now,” Weggemann said of her reinstatement to competition. “When I can’t trust my body, it’s just better to stay away.”

It is not yet clear whether Weggemann will join her husband in the military. She already has one son, Ben, who is an active-duty soldier. Weggemann and John-David Weggemann are also expecting their second child together.

Weggemann’s Paralympic career started at the age of 13 and came to a close in Rio de Janeiro in 2016, when she finished fourth in the 200-meter freestyle. She won her first international gold medal, and a bronze, at the 2013 FINA World Championships in Boston.

Despite the disappointment in Rio, Weggemann said it was an amazing experience.

“It was just really fun being a part of that team and to know we were competing against these guys who have more money, more fame, more everything that we don’t,” she said. “It was really cool just to realize the best way to be a person is just to be yourself and not try to achieve anything.”

Weggemann, who is from Salt Lake City and now resides in Jefferson City, said she took part in a couple of FINA races in France in 2016 and had hoped to return to the pool in 2019. But last year, after breaking her tibia in a fall, she stopped training.

“I just decided that it was really important for me to take a year off,” she said. “And it was, like, such a good year. I just didn’t feel like I was ready to get back in the water.”

In June, Weggemann is scheduled to compete in France in the World Championships, but even she doubts she’ll be able to compete.

“I definitely will never again be able to swim at 100 percent,” she said. “But it’s even harder for us now with two kids. It’s pretty scary. My calf just basically just crumbled, and it’s just part of what it is to run and play and hopefully being healthy and strong. I think it’s important for me to stay healthy and strong and do this for my kids.”

A 2017 graduate of the Massachusetts Institute of Technology, Weggemann grew up in Kansas and now does communications and marketing work for the University of Missouri. She hopes to use her experience as a road map for other people with special needs.

“We can start to connect with other people who have different kind of needs,” she said. “We can start to expand our abilities to be that person. A lot of the same things that we’re facing and feeling like a person, if you’re open to it and you’re giving it a try, you can get that same feeling or go to see a world where you can be that person and participate in a different environment.”