Emma Hayes: ‘Women need to lead’ in football and girls need to be taught ‘right from the top’

• Forward says: ‘I think women need to lead’ • Woman is also studying for a business degree at Newcastle Emma Hayes has said she believes more women should lead in the football world,… 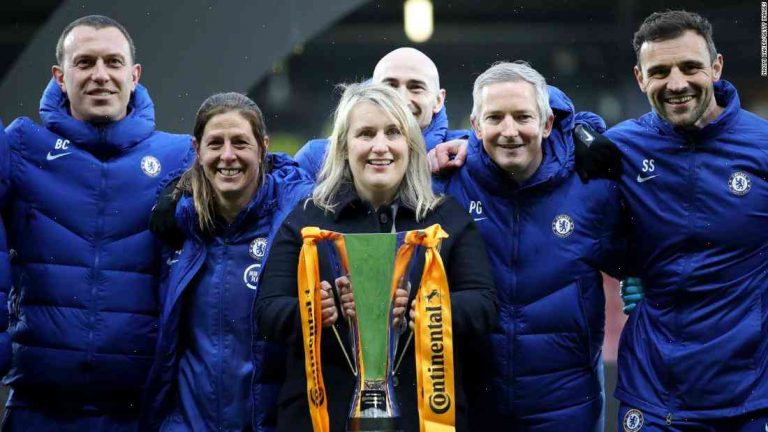 • Forward says: ‘I think women need to lead’ • Woman is also studying for a business degree at Newcastle

Emma Hayes has said she believes more women should lead in the football world, saying: “I think women need to lead in football and I think girls need to be taught the same way men are taught, right from the top.”

Hayes was making her annual speech to Sunderland Ladies on the opening day of the Women’s Football Show at the Stadium of Light, where she was appointed as manager of the newly-formed club in May 2014. The Chelsea manager has spent more than two seasons working on the development of women’s football in Britain and Europe, and being appointed as a sports minister by the Theresa May government, has given her a wider platform to improve awareness of the game.

Hayes went on to talk about a speech she made to Sunderland’s players in 2013 when she asked them to question why they are still playing when “the top men’s clubs don’t.” She said: “There’s got to be an acceptance that we are nowhere near our potential. I know I’m from the north-east. I live here, I know the strengths, I know the weaknesses, I know what the needs are and I know why, but why can’t other people see it.

“This is the only thing I have achieved and these girls can change the game. They are the future and I want them to go on to make a difference. It’s also important that if they don’t want to do it, that’s fine.

“I want to give them the opportunity but I want them to do it. I want them to be challenged because that is how they get better. People are always questioning why I do what I do, but what other people need to realise is that they should want to go along the same road, if they’re not motivated to do it then you don’t have the right to question my motives.”

She went on to say she had been concerned by the progress of women’s football in the country in the past few years, before adding that this was also because the FA had not taken men’s game enough seriously and should have built on the successes of the women’s game.

“People underestimate the difference between clubs, how much work goes into it. How hard it is to make the next step. In recent years it feels like we haven’t taken it seriously enough. Why isn’t the FA putting more money into it? Why don’t they have the best coaches in football working on it?” Hayes said.

“When Chelsea won the Women’s Champions League the number of women’s academies they had in England jumped from 20 to more than 30.”

Hayes will start studying for a BA business management degree at Newcastle University in the winter, and is also involved in a football project in Nigeria. She added: “I’m busy and passionate but these opportunities will only come if you chase them. If you choose the right things you can fulfil your potential, you can achieve your goals.”

I’m vain – but I’m happy, says the You reader